The Magical Sponge That Makes Dishwashing a Breeze

Do you love your kitchen sponge? Funny question, I know. I bet most people wouldn’t give their kitchen sponge much thought. Most sponges are serviceable enough on their own to go unnoticed until a telltale point reveals itself—an off smell or a lackluster cleaning job, perhaps—signaling it’s reached the end of its lifecycle.

I’ve never really been brand loyal when it comes to the sponge world. For the most part, I lean on the big guns found in most supermarkets across the U.S.; sometimes I’ll dabble in a natural-looking sponge the color of kraft paper. But I always grab the ones with a scrubby side. I wash my dishes by hand nearly every day, so it’s important that my sponge is ready to work.

Truth be told, I definitely don’t replace my sponges as often as I should. I’ll be the first to admit it: Laziness and forgetfulness trump my fear of germs every time. With frequent and heavy kitchen activity, I’ll likely replace my sponge every four to six weeks—that’s usually when the sponge gives me signs it’s ready to retire, like a worn-down scrubby side or a potent odor. During the colder months, when I’m braising in big pots, and baking up oozy, cheesy lasagnas and gratins, the signs come sooner. There’s nothing like getting that first net of melted mozzarella on your sponge after cleaning a lasagna pan; hot water only seems to make the spidery web of cheese worse. It’s the inevitable beginning of the end for a sponge.

When I came upon a new sponge by Skura Style last year, it didn’t take me long to realize what a superior cleaning sidekick it was. Unlike a traditional cellulose sponge, the Skura sponge is made of an antimicrobial polyurethane foam, a material that is reported to significantly reduce the spread of E. coli by up to 90 percent, according to a recent study. (A previous report found cellulose sponges to be 200 thousand times dirtier than a toilet seat—GAH.)

An Enchilada Pan Has Nothing on This Sponge

Warding off the spread of dangerous bacteria is compelling enough, sure, but I needed to know if it was up to snuff in getting a sink full of dirty, greasy dishes back to their gleaming glory.

Not only did it perform (eggy fry pans and cheesy lasagna casseroles, be damned!), even after repeated, pretty aggressive use over a few weeks, the integrity of the foam stayed intact with no trapped bits of food and zero smell. Pretty game-changing, if you ask me! The “scrubby” side also has a fade technology, where the “S” pattern fades with use, a helpful visual cue to nudge you along for a replacement since there’s no smell or deterioration of the sponge itself (mine probably faded faster than normal—what can I say, I’m an ardent scrubber).

This sponge will tell you when it’s time to give it the boot. Photo by Skura Style

The subscription sponge service will send you four sponges either monthly or every other month for $12/shipment (use code “SPONGE” for $5 off of your first shipment). Skura, Swedish for “scour” and “scrub,” has found a fan in this dishwashing-lover. 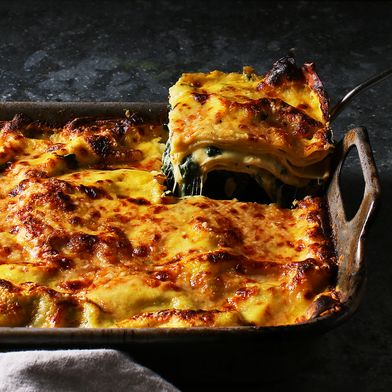 Do you have a favorite sponge? Let us know what it is below!

Source: The Magical Sponge That Makes Dishwashing a Breeze

How To Make Creamy Ice Cream with Just One Ingredient! — Cooking Lessons from The Kitchn
Juicy Stuffed Tomatoes, the Roman Way
Garlic Butter Asparagus with Crispy Parmesan
close me