A Big Little Recipe has the smallest-possible ingredient list and big, BIG everything else: flavor, ideas, holy-cow factor. Psst: We don’t count salt, pepper, and certain fats (say, olive oil to dress greens or sauté onions), since we’re guessing you have those covered. Today’s special: crusty-edged, melty-centered fritters that come together with two ingredients.

The last hollered at me—not for its ritzy ingredients or flashy technique, but for the exact opposite. Waters’ dish, unlike its bedfellows, was uncomplicated. If you wanted to recreate it at home, who’s to stop you?

In this way, the dish empowered instead of awed, which, ironically, made it more awesome. It “introduced many Americans to chèvre and exalted the pleasure of a simple garden salad.”

This was 1980 in Berkeley, California. Soon enough, funky-fresh cheese and minimalist salads spread like weeds across the country. Over 40 years later, the combo has yet to lose its charm. Then again, why would it?

Tangy, custardy cheese; golden, crunchy breading; and crisp, raw greens, barely dressed, like someone about to dive into the ocean. The formula is stripped down and to the point, just like all Big Little Recipes hope to be. 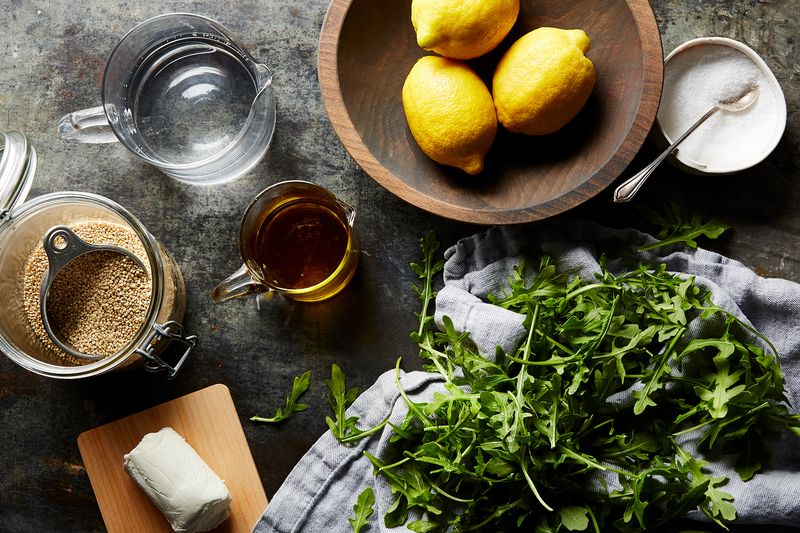 I wanted to celebrate this. And switch it up.

Instead of keeping the cheese and crust separate, why not stir together, team up, join forces, save the world? This moves away from a special medallion, of which you’d savor one or two, and toward a heartier nugget, of which you’d gobble up as many as possible.

I started brainstorming breadcrumb alternatives. Something that could act as a binder. Something I’d want to eat alone. Something grainy, like rice or barley or farro. Or—or, or!—not grainy, like quinoa, which is actually a seed, but cooks up fluffy and nubby, almost like couscous. 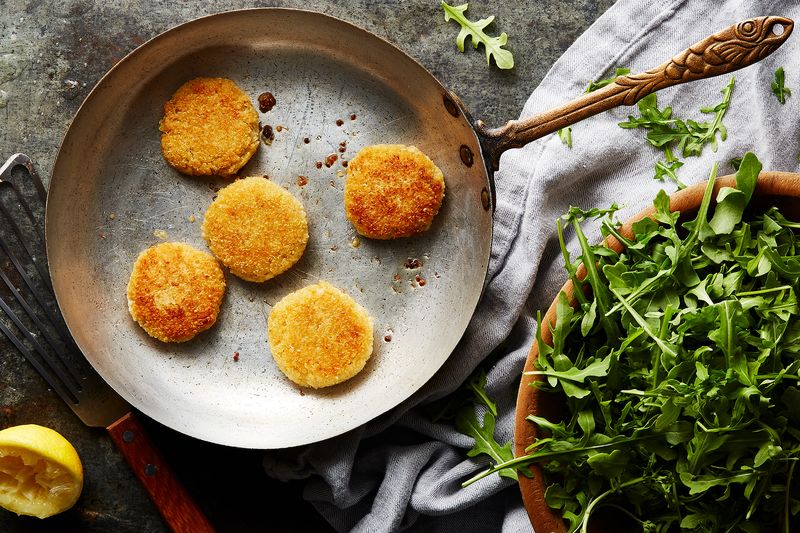 Bonus: Unlike many grains, which take 30-plus minutes to cook, quinoa requires half that. Once it has absorbed all of its water and turned tender, add gobs of goat cheese, then stir until everyone is melty and gooey and happy. Let cool for a few minutes while you feed the cat or set the table or tell the cat to get off the table.

Now form into little patties. There is no right or wrong way to do this. You could use a cookie scoop, then smush flat. Or, my preference, by hand. Things will get messy. But if you lick the goat cheese off your fingers, no one would ever know (and I would never tell).

Because the quinoa is already cooked, the patties crisp up in shimmery olive oil in as little time as it takes to dress the salad. Which is a kind way of saying: Throw baby arugula into a big bowl, carelessly drizzle with olive oil and lemon juice, sprinkle with salt, and toss by hand.

If this all sounds almost too simple to be a recipe, well, that’s the point. 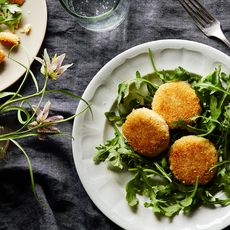 For the quinoa patties

What’s your favorite way to eat quinoa? Tell us in the comments!